NOT Found in Stores!

Never let a language barrier stop your wanderlust! The new AWARD-WINNING Rosetta Translator Pro™ utilizes powerful AI (Artificial Intelligence) Algorithms to give you the the fastest and most accurate translations for 40+ languages in real time! Simply press the button, speak, and get the translated version in an instant. ALL Supported languages are interchangeable. Replies can be understood with a simple change to the settings!

Push the button on the device and hold it until you finish your speech. The translator will recognize what you said and speak out the translated result.

Very easy to use, portable for everyday use. Easily fit it in your pocket, wallet for easy translation on the go! Super convenient! It works great. The instructions are easy to follow.
I hope my parents could use it as well when they come and visit me.
They don't understand any English. When they go out and have trouble, it's hard for them to find help.
With this translator, hopefully, it will help them a little bit.
I'm also glad about the device’s voice, loud and clear - it's important for old people. I highly recommend this! 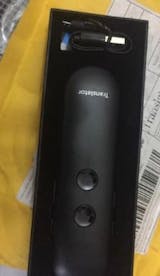 I purchased this translator almost two months already, this translator is much better than I thought, I am very satisfied with this product, I took it with me to business trip last week.
It was great and I loved it 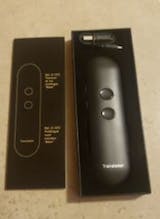 Amazing Product! It translates so many languages in an easy to use way, even my kids were able to use it. 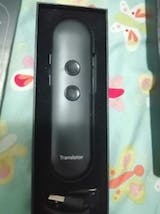 This is the future of travel and business. Amazing value, thank you! 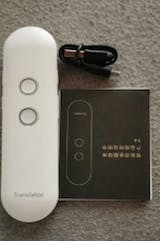 I have been preparing for going abroad and I am worried that my German is not good enough and we will spend the whole Christmas holiday there. I need to ask for help, but the price is not too expensive and the basic conversation function is satisfied. It was only half the size of my iphone. It was designed with the most basic buttons. You need to use it with the Internet. The left and right keys adjust the volume of the sound and the upper and lower keys switch languages. Advances in technology have enabled the gadget to include a powerful built-in rechargeable battery that can be used for hours at a time, ensuring that tasks along the way are accomplished. We made the right choice.